But…… But…… It was all supposed to be okay now.

It is okay now.

Nothing to see here.

The Muslim Brotherhood has it all taken care of.

(Reuters) – Soldiers beat demonstrators with batons in Cairo’s Tahrir Square on Saturday in a second day of clashes that have killed nine people and wounded more than 300, marring the first free election most Egyptians can remember. 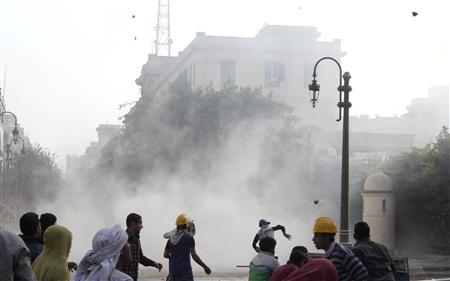 Protesters fled into side streets to escape the troops in riot gear, who grabbed people and battered them repeatedly even after they had been beaten to the ground, a Reuters journalist said. Shots were fired in the air.

Y’all are still going with that, Reuters ?

Really looking forward to see how you report what happens here in America next November.
.
.
.

.
.
.
Wait…… Last week…… Didn’t #HeilObama send Senator Lurch and Ambassador Puhpett over there to ‘fix’ everything ?

They’re not gonna play nice in the sandbox.

“I never voted because I was never sure it was for real.”

Egypt is the new Iran..

“We need a peaceful transition to civilian rule.”

It’s either taqiyya, or the guy is genuinely delusional.

“We will not allow troublemakers to meddle in the elections.”

“We are confident the elections will be clean this time, with no external interference.”

Egypt PM Kamal Ganzouri: Give us two months and……

“All Egyptian Muslims are willing to embark on Jihad for the sake of Palestine.”

“We are a nation with a great deal of patience”

……and the noose tightens a little more……

“Friday Of The Single Demand”

……and of course:   Iran ; Morocco ; Gaza ; Syria ; Mali, plus the rest of the 57 states in the building Caliphate to welcome in The 12th Imam.
.
.
.
Kenny Solomon
Israel Survival Updates

This entry was posted on Saturday, December 17th, 2011 at 09:45 and is filed under Main Postings. You can follow any responses to this entry through the RSS 2.0 feed. You can leave a response, or trackback from your own site.